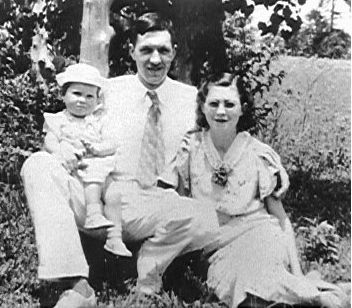 Julia and her parents George and Dora

Although George grew up in Appalachia and attended church there, he never used God talk. He never really discussed what his beliefs were nor did he try to influence what others believed. He simply lived his religion as a husband, as a father, as a neighbor, and as a church member. He made sure his family said a blessing before every meal and stopped the sibling rivalry long enough to read a Bible passage before they went to bed each night.

He allowed the community to create a softball field in his front yard, and he maintained a croquet field all summer where neighbors of all ages played. When the weather was not suitable for outside recreation, he skillfully played checkers or rook with his children; and no matter how hard they tried, they could not beat him at any games. Nevertheless, they looked forward to those times when he took time from his work to play with them.

His family was the center of his purpose. Since he was the oldest male of his nine siblings, he was considered the head of his family after his father died, and lovingly arranged for the physical and financial care of his mother. He was always making repairs to her house so she could live alone as was her desire. When she became disabled, he even built a wheelchair ramp on the back of his own house so that it would be convenient for her to visit. In his quiet way he grieved for a long time when his nineteen year old brother died in the South Pacific in 1944 and when his twenty-seven year old brother died in a Navy plane crash in 1950, leaving behind a wife and two young sons, one only a few months old.

When George was a young man, he determined that he did not wish to be a farmer as were his parents and many generations of ancestors before him. As soon as he finished high school, he moved to town to go to work in a factory; but when he was not working, he pretended to be a farmer, raising many food crops to feed his family and to share with others. He also loved landscaping and flowers as did his mother. He loved to share his roses with the women who rode in his work carpool, and he planted a field of flowers next to the road near his house for the people passing by to enjoy.

He did not join a church until after he left home because there was no Baptist church within walking distance of his house, although he had received a solid foundation of Bible instruction through regular attendance in the little Presbyterian mission church located near his home. That knowledge had been reinforced and expanded when a small group of Presbyterian ladies from Washington, D.C., gave him a scholarship to attend a Presbyterian mission boarding school after learning that he kept going back to seventh grade in the little one-room school in the community because he did not want to stop learning. That Bible study convinced him that he wanted to join a Baptist church so he could be immersed in baptism. For the rest of his life he studied the Bible and Baptist polity and sometimes served as a substitute teacher in the men’s Bible class.

Although his father was always the person who prepared breakfast when he was growing up, he was chauvinist enough to forbid his young son to do any kind of work inside the house. However, he did not hesitate to assign his older daughter the task of mowing their one acre lawn with a push mower, to use her as an assistant when he broke new ground or to seek her help with his many construction or remodeling projects. He supported his daughters in earning professional educations although his colleagues said educating a girl was a waste of money.

When he was in his mid-thirties, he bought his first car and learned to drive. Not only did that car make it possible for him to participate in more activities at church, but also he used his car to transport neighbors to church, to take many young people to Ridge Crest, to Eagle Eyrie, or to a basketball tournament.

He was never pious, but he believed in clean living — no tobacco, no alcohol, no foul language– except when he was plowing behind the old mule, and his wife hoped neither his neighbors nor his children could hear his commands.

Music was so important to George that he taught himself to play his guitar by studying a course he ordered through the mail. He then used that musical knowledge to play his autoharp and his harmonica, which he carried on tours to entertain his fellow travelers. Many times at home he would just break into song — singing folk songs or hymns which he knew by heart. He was a faithful bass singer in the church choir where everyone enjoyed watching him because he twisted his face into many contortions as he concentrated on reading the music.

His faith was demonstrated strongest when he knew he was dying from pancreatic cancer. He thought it was useless to try to extend his life a few more days or weeks because he was ready to die – he had lived a good life; his work was finished.